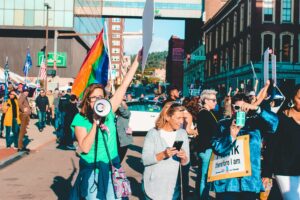 Get used to Trillions. The ECB thinks that the “severe but plausible” number we are heading towards for delinquent debt in the Eurozone is €1.4 trillion. Meanwhile Bloomberg report another two hundred US Plcs have joined the Zombie ranks, struggling to cover interest payments, pushing total Zombie debt to $1.36 Trillion and Zombie numbers to one in five of the top 3,000 US firms. One in five, isn’t a misprint. Total global debt has surged by $15 Trillion and is expected to exceed $277 Trillion, that’s 365% of GDP by year end according to data released this week by the IIF (Institute for International Finance).

Vaccine announcements come not a moment too soon if the current financial system is to helm through the maelstrom of asset destruction from defaulted debt. Next year’s mass vaccinations and economic surge will come with fading bank forbearance and Government supports so 2021 is the first fracture year, when banks pick through the carnage to determine who isand who is insolvent and, regulators do the same to banks. It marks the opening of a decade of pivotal change, let me explain;

While a reshaped global economy roars back into life it will do so aided by a financial system buckling under decades of money printing and facing the end of its long-term debt cycle. Just look around, total debt has reached a level that cannot be serviced by increased interest rates. It is why rates are negative across bank deposits and much of the Government bond market, why there are so many undead companies, sustained purely by cheap credit refinancing.

The most vulnerable part of the debt bubble will be Leveraged Loans a sector estimated globally to hold $5 trillion in debt, the kind given to already highly indebted companies to do things like share buybacks, mergers, acquisitions, management buyouts etc. A fifth of this debt has been repackaged in bundles known as Collateralised Loan Obligations CLOs and sold on by banks to Insurance companies, Pension funds etc. One in seven holders of these assets is blind to regulators according to the Financial Stability Board (FSB). Leveraged Loans is the sector most likely to first erupt.

The result of the last decade of money printing is a glut of capital, zombie corporations starving oxygen from competitors and sluggish Japan-type conditions for countries with aging populations. Big changes are afoot, next month the European Commission sits down to ratify a pan-European stimulus proposal, it is the closest the Eurozone has come to financial federalisation but underneath, banking rescues continue to rely on national actors despite the adoption of a single supervisory mechanism in 2014. The SRB (Single Resolution Board) established to deal with bank failures has €42bn in its coffers and has rejected a pan-European bad bank like NAMA to clean house.

In practice the solution to bank failures can vary from smooth takeovers, negotiated quietly to dramatic closing on a Friday before reopening on Monday to changed terms and conditions. This includes haircuts not just for bondholders but for depositors too.

It is also an illusion to think that all banks can be saved, some are simply too big to save and others, not deemed of sufficient systemic importance, won’t be saved but these details appear lost on most depositors, blissfully unaware that banks now charging you to hold your cash are doing so at a time of increased system fragility.

It is not just the financial system that is being reimagined but capitalism and its currencies. Powerful technocrats perceive in the global pandemic, the start of a new epoch. It is a dry run for how climate change may be handled. These believe that this decade is the beginning of the 4th Industrial Revolution, the Great Reset, the next wave in Globalism, take your pick. Remember capitalism ended when technocrats at Central Banks chose to permanently interfere with its natural destruction and renewal cycle, what we’ve had ever since is Central Bank dole starting with Sovereigns and Corporates and coming soon to civilians.

This may sound strange, but we need to pay far less attention to hard-left din and stunts like Extinction Rebellion and much closer attention to what elite technocrats and capitalists are planning when they gather to reshape the world, in our best interests.

Dismantling the invisible hand of local capitalism in favour of centralised global technocratic rule is currently under active planning because Covid-19 has given it the perfect runway, populations frightened into submitting to unelected politburos, as we are to NPHET. A lead promotor of the Great Reset is Klaus Schwab founder and Executive Chairman of the WEF (World Economic Forum) in Geneva who has said; “What the fourth industrial revolution will lead to is a fusion of our physical, digital and biological identity.”

A new financial system with new currencies is in the works. This is not idle speculation, in October the head of the IMF, Bulgarian Economics Professor Kristalina Georgieva flagged a ‘New Bretton Woods Moment’ which indicates advanced plans for a reset of the financial system. This is likely to include centralised control of money through phone Apps that allows for the full substitution of paper with digital currency. It won’t happen quickly but, the first steps are underway with plans to introduce a digital Euro.

This is already announced by former IMF Chief Christine Lagarde now leading the ECB in a race against other central banks. Universal Basic Income is likely to follow, digital payments to the jobless displaced by robots to stay at home like battery hens while, Modern Monetary Theory (MMT), in the hands of Central Bankers, prints money unconstrained by bond markets and works in a close unison with populist politicians who link spending bonanzas to retaining seats.

The WEF, which partners a thousand leading companies popped up, together with John Hopkins Centre for Health Security Hospital and the Bill & Melinda Gates Foundation, to recommend global action after a simulated global pandemic in a meeting that took place on October 18th 2019. Klaus Schwab’s objective is to advocate for centralised technocratic rule to oversee less fossil fuel consumption, lower standards of living, less civil liberty and accelerated automation of jobs while giant companies adopt higher ethical and environmental standards.

In a script that would fit Blofeld head of Spectre, Schwab is effusive about implanted microchips; “Indeed, some of us already feel that our smartphones have become an extension of ourselves. Today’s external devices—from wearable computers to virtual reality headsets—will almost certainly become implantable in our bodies and brains.”

This is the nirvana, the singularity that weds our children when they grow up to technology, so every thought is read by a microchip implant, every movement tracked by a technocratic nerve centre, for their own good.

Call me old fashioned but I prefer my revolutions to be decided by flesh and blood people I can see, by citizens exercising free will and not panicked into surrendering personal freedoms for security. Never fear, technocrats will run head long into resistance especially when they seek reductive democracy but its important, nevertheless to see them coming.

So, two cheers for messy democracy and three for Adam Smith.