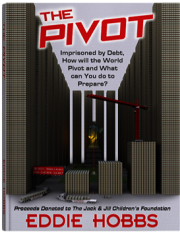 Whether you’re paying off debt or keeping money in banks, property, pensions, superannuation schemes, the post office or buried under the carpet, you need to read this book.

Imprisoned by Debt How will the World Pivot and What can You do to Prepare? The Pivot by Eddie Hobbs from Jack & Jill.

Eddie Hobbs has been working in financial services since age 16 – through several recessions he’d tell you and probably first came to consumer attention for collapsing the mis-selling of Endowment mortages in the early 90’s. He went on to campaign for disclosure rights for financial consumers and which became law in 2001. Later in the mid noughties his RTE TV exposé Rip Off Republic caused consternation amongst the political establishment. Eddie would describe himself as a maverick, who has had his own up and downs.
Along the way he’s been a prolific writer, an award winning TV presenter and speaker and, occasionally, a consensus – challenging contributor to live radio and TV debates especially on matters related to how Ireland is run.

Liven up the dullest conference, meeting or party with a visit from Eddie email sarah@eddiehobbs.com confirming the date you had in mind, the location and the details of the event and what you would like Eddie to do.

Acting as your Pension Trustee

Eddie is personally a Revenue Approved Pensioneer Trustee for nearly 20 years. Pension Schemes are becoming complex, tricky and risky activities for corporates with the advent of fresh waves of regulation.

Acting as your Pension Trustee

Progressive companies invest in all sorts of great training events and self- help programmes these days.  If you’d like Eddie to run a financial awareness and make over programme for your staff, just email sarah@eddiehobbs.com.